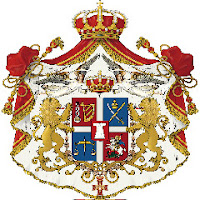 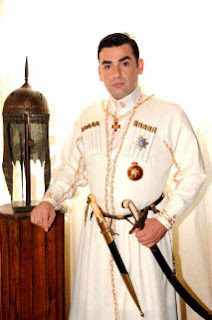 The Order of the Eagle of Georgia and the Seamless Tunic of Our Lord Jesus Christ is a family dynastic institute of the Royal House of Georgia, founded by Saint Queen Tamar (1184-1213) and was reconstituted in 1939 by the grandfather of the current Head of the Royal House, H.R.H. Irakly Bagrationi Mukran, as the main order of the Royal House.
Saint Queen Tamar constituted this order of knights in order to provide aid to the Empire of Trebizond, and she gave it the Tunic of Our Lord as its emblem and as its insignia, a single-headed eagle, in order to distinguish it from the heraldic emblem of the Trebizond Empire. The order refers to the Sacred Tunic that Our Lord wore during his martyrdom. According to legend, after the relic was raffled off to the Roman soldiers, it was taken to Georgia, preserved and buried in the Cathedral of Svetitskhoveli, along side the insignias of King David.
The Kingdom of Georgia was the first to make Christianity the official religion and for that reason the Royal House of Georgia is the oldest in all of Christendom. Its origins hark back to a brother of Saint Joseph both descendants of King David (who beat Goliath) and of the most wise King Solomon whose symbols are on the Royal House of Georgia's coat of arms.
The relationship with the Gospels was such that in the 12th century Saint Queen Tamar took this ancestry so seriously that she considered the Good Friday services to be like family funerals.
The bravery of the Georgian people has never been questioned. In the First Crusade, they already stood out from among the rest of the contingent as it was the Georgians who first entered Jerusalem, and the first church built after the city was taken was raised by Georgian troops.
In 1942, H.R.H. Irakly Bagrationi was elected President of the Union of Traditionalist Georgians by the exiled Georgian leaders; outstanding members included Zurab Avalishvili, Mikheil Tsereteli, Grigol Robakidze, Kita Chkhenkeli, Shalva Maglakelidze, Shalva Amirejibi, Spiridon Kedia, Markoz Tugushi, Giorgi Kvinitadze, Leo Kereselidze, Revaz Gabashvili, Davit Vachnadze, Alexandre Asatiani and Svimon Tsitsishvili, among many others. The Union's objectives were the restoration of Georgia's independence and the proclamation of a constitutional monarchy.
It is important to point out here that, for the political standards of the time – dominated by totalitarianism – the very mention in the Union's program of the constitutional monarchy as an objective to be achieved represented a true ideological positioning of independent, national and democratic significance.
H.R.H. Prince Irakly married aristocrat Maria Antonietta Pasquini of the Counts of Costafiorita in Rome on 20 June 1940. She had been born in San Angelo in Vado on 26 April 1911, and she died in Rome on 22 February 1944. She was the daughter of aristocrat Ugo Pasquini, Count of Costafiorita and aristocrat Enrichetta Gastaldi. H.R.H. Prince Giorgi Bagrationi was born of this marriage.
His second marriage was to H.R.H. Princess María de las Mercedes Teresa María de la Paz de Todos los Santos Francisca de Borja de Baviera y Borbón, Princess of Spain, who was born 3 October 1911 in Madrid, and died in the same city on 11 September 1953. From this marriage were born Princess María de la Paz and Prince Bagrat.
It should be remembered that H.R.H. Prince Irakly claimed no leadership of another order, the Order of Saint Queen Tamar, which had been founded by the Georgian Legion in 1915, made official by the first Republic of Georgia during its short-lived independence in 1918 and abolished by the Russians after their new occupation. With this gesture, Prince Irakly wanted to underscore the national character of this Order, which has been relaunched by the current head of the dynasty after a period of inactivity.
Upon his death in 1977, Prince Irakly was succeeded by his first-born son H.R.H. Giorgi Bagrationi, who preferred to maintain the order within the strict circle of his family for reasons of discretion and dynastic policy until, in 2001 he decided to give concessions to excellence and merit. After 2003, he gave it a new Constitution establishing the terms and conditions under which it is currently governed. From the very beginning, H.R.H. Giorgi Bagrationi wanted the Order to be an effective instrument of assistance to the people of Georgia.
During his exile, H.R.H. Prince Giorgi Bagrationi obtained Spanish citizenship, as he arrived in Spain at the age of six months. Since 1982, he has been managing public relations as a general consultant to Fiat-Lancia España. He has been married twice. From his marriage to Mercedes Zornoza y Ponce de León, he had three children: María, Irakly and Davit. From his marriage to Nuria Llopis Oliart he had his third son, Ugo.
In 1995, H.R.H. Prince Giorgi Bagrationi transferred the bodies of his grandparents – TRH Giorgi Bagrationi and Elene Bagrationi – to Georgia, accompanied by his aunt and his cousin the Grand Duchesses Leónida and María de Rusia and by his nephew Czarevitch George, and they were buried in the Cathedral of Svetitskhoveli. The funeral was officiated with state honors by HH Patriarch Catholicos Ilia II.


On that occasion, when President Eduard Shevarnadze received H.R.H. Prince Giorgi Bagrationi, he said to him, "My Lord, you are in your home. We need the Royal Family for the unity of the country."

H.R.H. Prince Giorgi Bagrationi was recognised as the Head of the Royal House and heir to the Crown of Georgia, and this has been ratified in Georgia by the three presidents that have taken office since its independence from the Soviet Union. It was President Mikhail Saakashvili who made the royal family's Georgian citizenship official, providing them with Georgian passports and identity cards and conceding them the status of royalty on both documents. In 2005, H.R.H. Prince Giorgi Bagrationi settled in Tbilisi, where he resided as the rightful King Giorgi XIII until his death on 16 January 2008.


Despite two hundred years of Russian occupation, the royal status of the Bagrationi dynasty has never been called into question in Georgia.
During the Grand Mastership of H.R.H. Prince Giorgi, significant figures from the royalty and the nobility enter the Order. Upon the death of H.R.H. Prince Giorgi and according to his wishes, he was succeeded in the Grand Mastership by his third-born son, H.R.H. Prince Davit, following the Georgian tradition of succession, in which the monarch or Head of the Royal House designates the most suitable choice from among his sons.
On 15 November 2007 – during the lifetime of H.R.H. Prince Giorgi – His Holiness and Beatitude Patriarch Catholicos Ilia II made a pronouncement in favour of restoring the monarchy in Georgia. This pronouncement had an impact on the Parliament itself, which approved the Patriarch's proposal, with 102 of the possible 108 votes cast in favour of restoring the monarchy. Prince Giorgi himself declared that it was a task for a Bagrationi younger than he, and it would fall by necessity to HR Prince Davit, who had been educated along side HH the Patriarch, who is well familiarized with the political reality of his country. HH Patriarch Catholicos Ilia II belongs to the Order, and he wears the Grand Collar. The different situations through which Georgia is passing has caused the final administrative procedures for the restoration of the constitutional monarchy to be delayed.
It will come as no surprise that the membership list of the Order of the Eagle of Georgia and the Seamless Tunic of Our Lord Jesus Christ is replete with names of knights and ladies who support the legitimate aspirations of H.R.H. Davit Bagrationi. During the Grand Mastership of H.R.H. Prince Irakly, the knights of the order included – among others – his brother-in-law HIRH Grand Duke Wladimiro Kyrilovich Romanov, King Humberto of Italy, King Boris of Bulgaria, Prince Jaime de Borbón, Duke of Anjou and Segovia, HIRH Archduke Carlos de Habsburgo-Lorena y Borbón and his brother HIRH Archduke Francisco José de Habsburgo-Lorena y Borbón, H.R.H. Prince Nicholas of Romania, the Head of the House of Borbón-Sevilla Duke Francisco de Borbón y de Borbón (who served as chancellor during a prolonged period), and so on.
Nevertheless, H.R.H. Prince Giorgi Bagrationi wanted to provide the Order with new statutes more in keeping with our times and he did so in a letter dated 23 November 2003. In this letter, the old rules were adapted to the current reality. H.R.H. Prince Davit has ratified the Great Mastership Council and the letter provided by his father.
The Order has been restructured into Rectories, in accordance with the legislation in effect in each country. The diplomas – which previously had been issued in French – have also been changed, and are now issued in Georgian, English, French and Spanish.


In order to enter the Order, it is necessary to profess the Faith of Christ, to be of good condition and pure customs, and to demonstrate virtue with regards to Georgia and the cause of the monarchy.
Since H.R.H. Prince Davit has assumed the Grand Mastership of the Order, it has become reinvigorated, opening new Rectories in different countries and on different continents and admitting a large number of knights of recognized nobility.


It is a dynastic Order, dependent upon the Royal House of Georgia, and is bestowed in five categories: Knight, Commander, Grand Official, Grand Cross and Grand Collar. It is conceded not just to members of the royal family, but to those the Grand Master wishes to reward for their qualities with regards to the Georgian national cause.
Its insignia par excellence is a collar of links comprising an eagle, a cross and a tunic – all of gold – from which hangs a red cross pattée covered with gold-bordered azure circles, and whose centre holds the Georgian eagle, highlighted by a red escutcheon with the white tunic of Our Lord. All with the Crown on top. The Grand Cross badge is the same cross pattée with a gold starburst edging, and the band is deep red moiré.  The Grand Official badge is the same insignia over a gold and silver starburst, and the Commander's badge has a silver starburst. The Knight's badge is a badge without any starburst. From the badge hangs the Cross with the Crown over it, hanging from a deep red ribbon. With regards to their heraldry, the knight of the Grand Collar and of the Grand Cross may surround their personal coat of arms with the insignia of the Grand Collar.

H.M. The Queen Elizabeth II of the United Kingdom


Catholicós-Patriarch of all Georgia the Archbishop of Mtskheta-Tbilisi and Metropolitan Bishop of Abkhazia and Pitsunda H.H.and Beatitude Illia II
H.H Bartholomew I Archbishop of Constantinople New Rome and Ecumenical Patriarch.
H.H Irinej,Archbishop of Pech Metropolitan of Belgrade-Karlovtzi and Serbian Patriarch
The Patriarch of the Holy City of jerusalem and all Palestine ,Syria, Arabia , Beyond The Jordan River , Cana of Galille , and Holy zion K.K. Theophilus III
H.E. Bidzina Ivanishvili Prime Minister of Georgia
HIRH Grand Duke Wladimiro Kyrilovich Romanov.

KNIGHTS OF THE GRAND CROSS

LADIES OF THE GRAND CROSS

Rector Coordinator of the United States of America